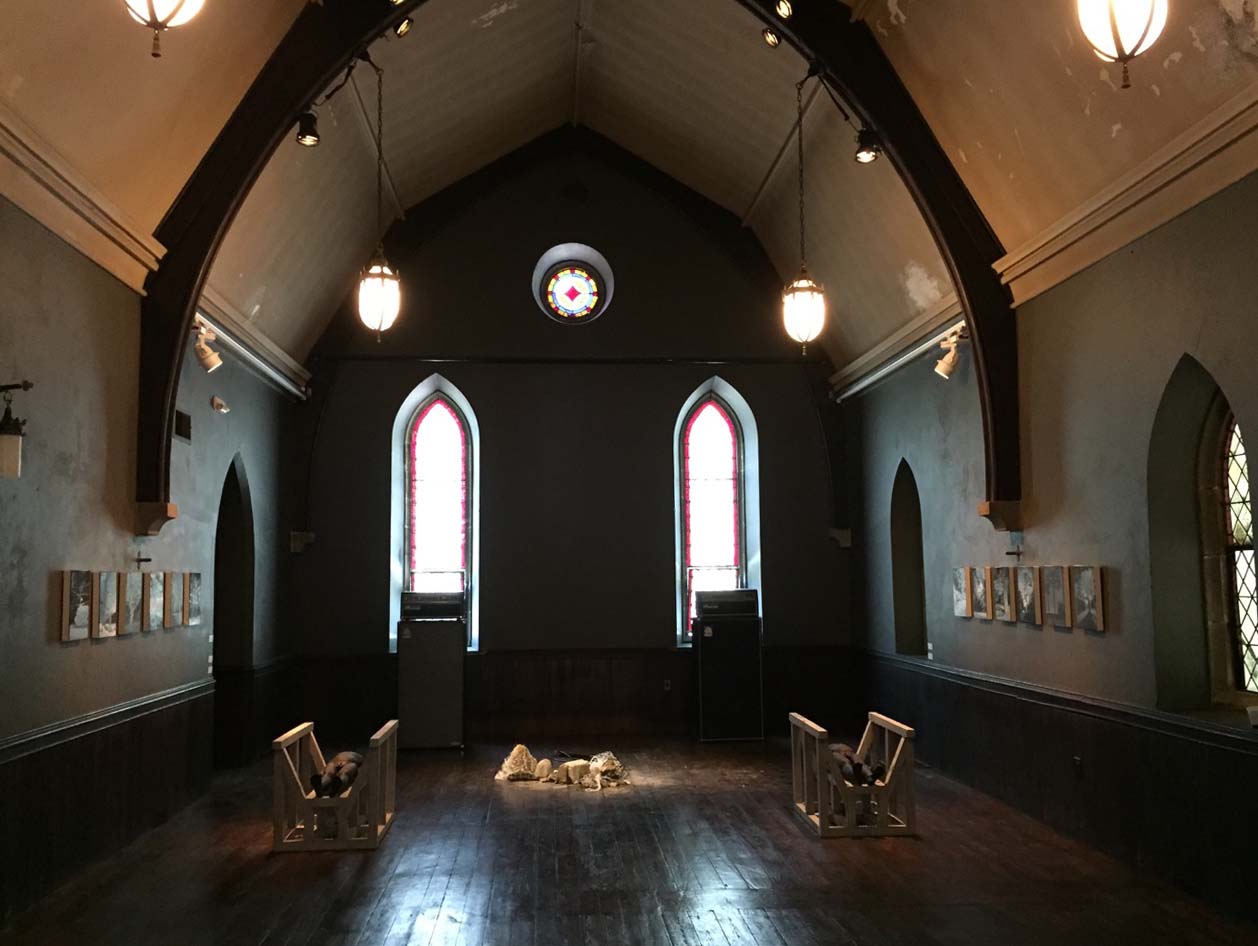 It is a meditation on the bucolic as sinister and the quiet violence of the pastoral, along with the various rituals attached to both natural and personal cycles. Rural Violence features two performances that function as distinct movements, representing an opening and closing to a specific cycle.

Dominick Fernow’s solo performance, in collaboration with John Sharian, initiates movement one on August 8, 2015. The trace he leaves behind—stone, net, rubble, an archival recording (that will loop continuously)—will be used by the countertenor Brennan Hall and sound artist Dana Wachs on September 19, 2015 to initiate movement two, which features Hall singing an operatic piece over Fernow’s recording and Wachs playing the bells in the church’s bell tower.

As Fernow performs, he will face Matthew Barney’s one-man attack on the opposite wall, as will Hall a month later.

Matthew Barney creates a holy space through solitary exhaustion. His Drawing Restraint 18 was originally performed as an altarpiece in the basilica-inspired floor plan of his Prayer Sheet with the Wound and the Nail exhibition. Here, for Rural Violence, it is situated in the rafters, across from an altar made with the work of Lionel Maunz and Cynthia Daignault, and Dominick Fernow.

Lionel Maunz’s sculptures of dead boys murdered violently by other children, 25 years apart, suggest an ongoing cycle of violence. The pieces draw from Mary Bell’s 1968 murder of the 4-year-old Martin Brown and 3-year-old Brian Howe when she was 11 and the 1993 murder of the 2-year-old James Bulger by two 10-year-olds, Robert Thompson and Jonathan Venables. As Maunz explains, “The point of the piece was to create an uneasy symmetry between perpetrator and victim. The iron boys I sculpted to be around 6 or 7 years, which is the mean age between Bells’ victims and Bulger’s murderers.”

Cynthia Daignault’s paintings, which depict a solitary walk she has taken a number of times near her childhood home in Maryland, create a stain glass effect in the chapel. Night Walk suggests something sinister—darker human and natural forces—but also a kind of silent, solitary calm. As she notes, in a statement about the work, it’s also a place of transformation: “I think night and forest will always be the birthplace of selfhood…This is the primordial landscape in which self-determination, illicit pleasure, deep secrecy, and sexual awakening take root and become forever entwined.” Here they are windows that only allow a view inward.

We use the term “rural violence,” but not only in the sense of small-town crime, packs of skinheads, the KKK. Not necessarily an ugly fight or murder. It’s the violence of nature and the natural world. Things that happen, and that seem brutal, but are part of the cycle of things: the moment after salmon spawn, and their corpses pile up in the shallows of a river. It’s eerie, but gorgeous, and also mundane. We are looking at moments that feel violent, but also maybe beautiful, and then we’re suspending and zooming in. We’re also ritualizing these things in a very human sense:

using the church as a departure point and creating a kind of ongoing mass or ceremony that will shift with the second movement and keep repeating until we take down the project on October 31. My sons have a book about the forest, where two children keep happening upon situations or tableaus— broken leaves, gnawed bark, some blood in the snow. These are moments right after an activity has ended. The next page shows what caused the shift in the landscape— a rabbit eating grass, a fox eating the rabbit. I like to think of this project as working backwards and forwards from that.