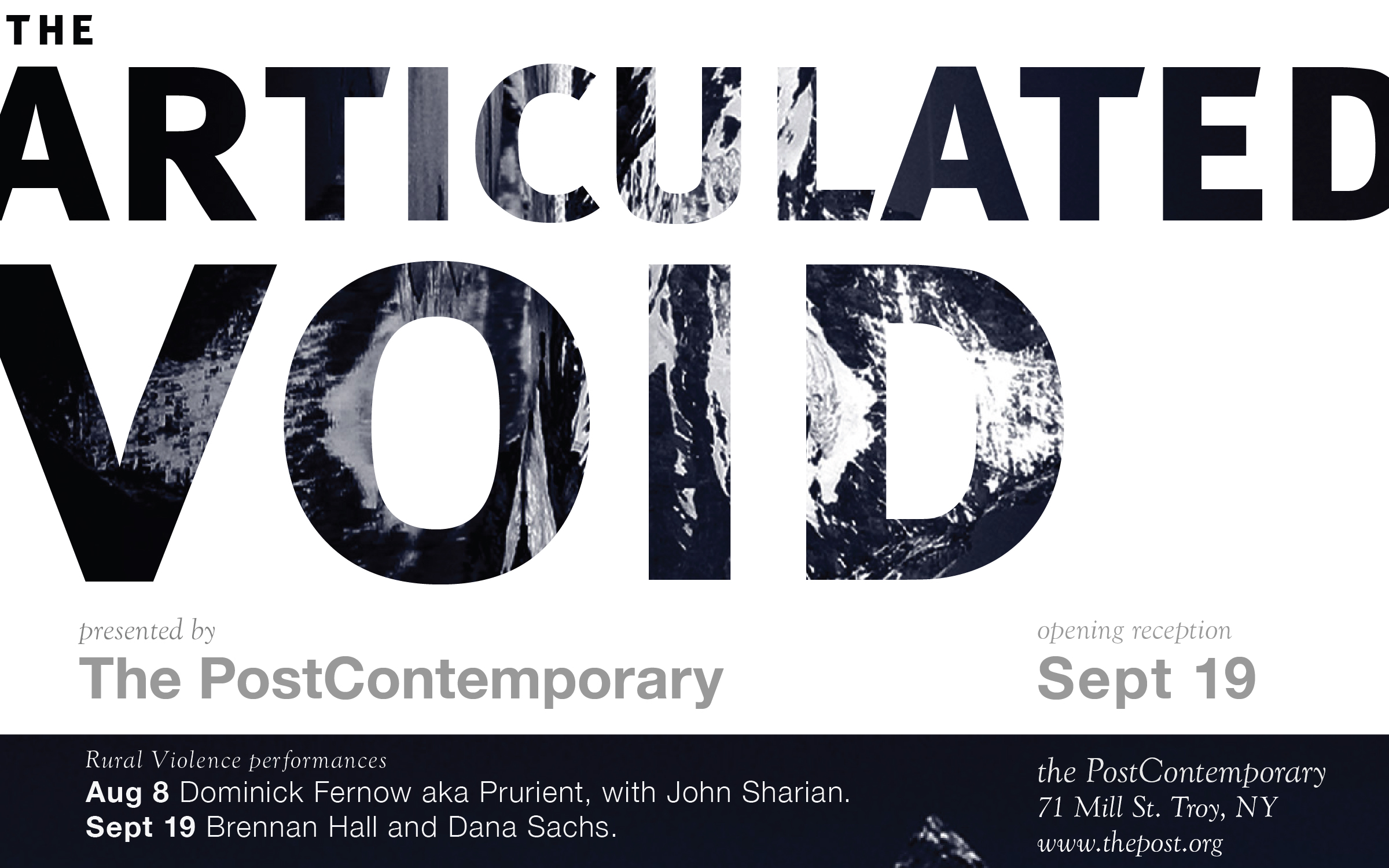 A greatness beyond the possibility of calculation, measurement, or imitation. A sensory  experience that inspires awe and veneration, and through this, has great power. Rumination on nature and travel in nineteenth century European philosophy led to the exploration of the tension between the beauty inherent in recognizable form and the awesome terror of its vast boundlessness. “Whereas the beautiful is limited, the sublime is limitless, so that the mind in the presence of the sublime, attempting to imagine what it cannot, has pain in the failure but pleasure in contemplating the immensity of the attempt” 1

The Articulated Void presents works across a range of media that overwhelm the senses in their refusal to be limned by simple categorization, exploring the beauty and terror inherent in our age.

The notion of the sublime was a key theme explored by the Hudson River School, who worked during the time that the Burden family was building the Woodside Church and used lyrical, violent images of nature to evoke specific emotional states.

In the present­day, the power and reach of the digital has vastly expanded experience: virtual configurations have blurred codified identities, suspended the limits of physical space, and collapsed traditional notions of time. Although advancements in computation have allowed us to quantify phenomenon that previously remained outside of our grasp, the measurement of these forms does not reduce their ability to invoke awe, as they still move beyond our senses.

Each artist in this exhibition troubles  the limits of perception. Frederick de Wilde worked as an artist­in­residence with NASA and Rice University to engineer a color known as “blacker­than-black” that absorbs most available light. For An Articulated Void, de Wilde created a new work, BlckStriations #1, that instead considers the light reflected from the color black, rather than what is absorbed by it.

Tameka Norris’ Post Katrina Sunset departs from a recurring nightmare the artist had after hurricane Katrina in which she is floating on the water clinging to a washer, refrigerator, or clothes bin. Staged by a picturesque lake at sunset, the artist struggles to use a large plastic container as a boat while a violinist plays from the shore along with a group of onlookers. As the artist fights to keep her head above water, the spectators do nothing to intervene. Post­Katrina Sunset raises the uneven relation between the mass media’s coverage of the disaster and the lack of assistance for Louisiana’s residents.

Positioned in the typical locale of a clock, Michael Bell­Smith’s Fireworks / Clock (2015) folds an explicit awareness of time into An Articulated Void. An analog clock keeps the actual time, while floating over a scene of exploding fireworks. Surreally unmoored from its backdrop, Fireworks / Clock (2015) points to the infinitely reconfigurable nature of digital information.

The constellation of works that comprises “Rural Violence” meditate on that which is unknowable within the rhythms of Nature. These works look beyond the idea of Nature as Other, and look more to our participation as a part of it. Set together, the pieces and  performances touch on facets of our relationship to the physical and natural world.

Cynthia Daignault’s paintings portray both the quietude of the dead of night, and allude to the sinister nature of what the darkness protects and fosters. Lionel Maunz’s figures bear the weight of innocents harming innocents. The calm appearance evokes a peacefulness or indifference to the the violence referenced.

Part of the nature of the sublime is its positioning of our human self in the context of the unknowable, and the acute awareness created of the limits of our physicality. Matthew Barney’s DR18 uses physical restraints in the process of drawing, putting on display “the imperiled body struggling compulsively with its own vulnerability.”2 The repetitive physical act mirrors a penitent struggle as a means of transcending the physical form to achieve an elevated, spiritual state.

Pushing up against the boundaries of physical endurance is also a key component of Dominick Fernow’s live noise performance. “The Vacuum of Man” uses amplified and processed cement, stone, and nylon net in a durational sonic onslaught. Sound is a less defined form, enveloping aural space while leaving no visible trace. The all ­encompassing effect is ephemeral, utterly dependent on Fernow’s ability to continue making it. Fernow’s performance also represents the layering of meaning that occurs from cycles, as Brennan Hall and Dana Wachs perform a second movement in September, using the ghost of Fernow’s work via recording as a voice in their performance.

2Wakefield, Neville. “Matthew Barney: Prayer Sheet with the Wound and the Nail.”